The mother of suicide victims Erin and Shannon Gallagher has claimed her daughters would still be alive but for internet sites like Ask.fm. 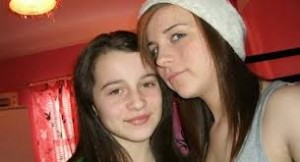 Lorraine Gallagher was reacting to claims by the owner of the Ask.fm website that teens often post comments about themselves to get attention.

Ms Gallagher said she was disgusted by the website bosses’ claims which she said were “disrespectful” to her dead daughters.

The 37 year old mum, who gave birth to a baby boy just two weeks ago, also revealed she is seeking legal advice on the claims through her solicitor.

Ask.fm chief executive Mark Terebin said 90% of teens who claim they are being cyber-bullied are actually posting the comments themselves.

He claimed “Kids lack attention mainly because parents are doing other things such as watching TV, drinking beer and reading the tabloids.

“When they come to sites like these, they start trolling themselves so that their peers start protecting them. I this absurd way, they get the attention.”

However, Lorraine Gallagher has slammed the claim saying Terebin is blaming teenagers while he profits on their misery.

Ask.fm claims to have 50 million users around the world.

Lorraine, from Ballybofey, lost her two daughters in a seven week period at the end of last year.

Lorraine said at the time that Shannon simply could not go on without her little sister by her side.

Reacting to Terebin’s claims, Ms Gallagher said that but for sites like ask.fm, her daughters would still be alive today.

“The internet is such a horrible place and sites like these allow people to hide behind a wall and throw all sorts of vile allegations against young teenagers.

“They are vulnerable and they believe what they read and go over it again and again.

“In the end it just gets too much for many of them and it pushes them over the edge.

“Why would teenagers write nasty things about themselves and push themselves to the edge and over the edge.

“None of this makes any sense and he (Terebin) is just using this as an excuse while he gets rich off of the problems of teenagers,” she said.

She added that he has never shown any compassion or remorse for the damage his website has caused to teenagers around the world.

“He doesn’t care that I lost my girls or that thousands of other young teenagers have been hurt by the vile claims on his website.

“He will have to live with himself knowing that he is operating a gateway of hatred that is only causing harm and doing no good whatsoever,” she said.