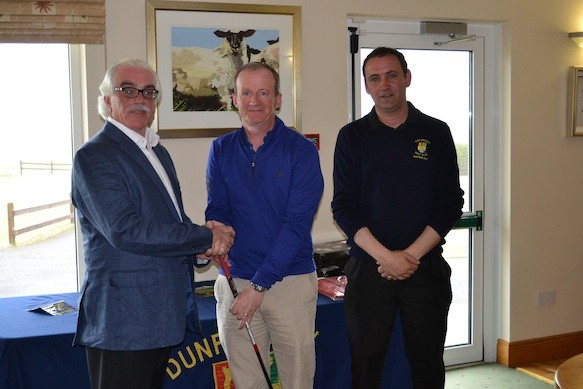 With the summer weather well and truly here the Dunfanaghy links is looking good. The fairways are pristine the greens brilliant and the rough – well rough.

All you have to do is hit it straight and stay out of the rough – according to wee James. Easier said than done, but that is exactly what Joe Terry did last Sunday to easily win the Hickey, Clarke and Langan Open Competition.

The Wednesday Opens continue with good numbers on the course and again scoring was good. Stanley Johnston took the top prize this week with a super 40 points. Second place went to Martin Doherty who beat Fr S. O’Flynn (winner a couple of weeks ago) by a whisker. Robert McElhinney took the gross.

The Friday 14 Hole Competition again say Charlie Roarty getting his top-up ahead of Neil McGinley. Neil always says he is not playing well yet he features quite a lot in the prizes and as for Charlie Roarty – well enough said.

Then we come to a weekend of super golf and competitions including the Club Classic.

The weather for the Classic was pretty good as was the scoring. There was a bit of blustery wind which made for not so easy conditions on the course.

Now one would have thought that 100 points was a good score here but the seasoned Classic winners of Kevin James, P Bonner, E Gallhe and M Dunne defied the odds and crushed the rest of the field with an unbelievable score of 104 points. This is a truly awesome score – well done lads.

Second place went to the team of Joe Terry, Cornie McMullan, Jimmy Keenan and Roger Green, again all seasoned players but unable to shoot a similar score to the winners. 100 points was still good enough to land second place with third and fourth being decided on BOT. The team of E McHugh, R Bell, M McGettigan and O McGettigan just managed to push their way into third place ahead of M Crossan, Noel McGinley, Aiden Fox and Brendan Fox.

Sunday was the Hickey, Clarke and Langan Open Competition. Many thanks to them as they have sponsored this competition for the last 31 years and a really great array of prizes for both ladies and gents were on offer. For the Ladies results please see the Ladies notes.

On the Gents side the player of the week was Joe Terry. Joe has only joined the club this year and has seen his handicap tumble as his winnings increase. Joe has played really steadily all year winning several competitions of note and last Sunday was no exception. Joe ran away with the lead carding a brilliant score of 41 points which was 3 shots ahead of nearest rival Bill McCallion. The rest of the prizes were all decided on BOT.

Bill has also recently moved his handicap to Dunfanaghy so a second place was a nice bonus. Bill just managed to win his prize on BOT from our Captain Michael Kelly who also carded 38 points. Captain Michael has seen his handicap freefall in recent times which is only right as he keeps on winning things – Golf competitions and the like – loosing another shot this weekend as well Captain.

Welcome back to golf, after a bit of a rest, to Paddy Hegarty. Paddy hit a superb shot into the second hole to 4 inches. We were on the third tee and saw it nearly go in – we were getting our drinks orders ready but it ended up just behind the hole. Paddy then just lagged it in for a 2. Welcome back Paddy they are not all as easy as that.

Keep an eye on for special offers on the meal front as our new Chef Gerry is putting together some meal deals for Friday nights. From all reports (including mine) the food is excellent at present.

We have had entertainment on in the club the last two weekends as well so get in there and enjoy a night at the club.