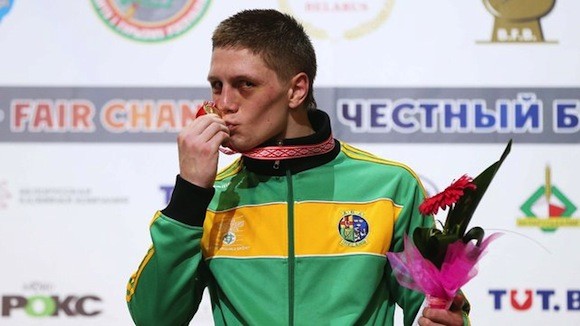 EXCLUSIVE: DONEGAL’S greatest ever boxer Jason Quigley has thanked the people of Donegal for their support – with a massive homecoming party planned for the Twin Towns on Monday.

The 22-year-old Finn Valley ABC Boxer was crowned Champion of Europe in Belarus on Saturday.

And his success – coupled with the Nicky Rackard Final win by Donegal’s hurlers – has made it a glorious weekend for Donegal sport.

The gold medal winner added the senior title to wins at junior and U-23 level and will hope to be Ireland’s welterweight representative at the World Championships in October.

Our story on Jason’s win yesterday saw record numbers of people on Donegal Daily as we brought the result of his win to you first.

The boxer was over the moon as he spoke of his triumph. And had a good laugh in the process.

“I’ve won Junior and U-23 golds at European level but this is a man’s medal now,” he laughed. “It means Paddy Barnes and the boys can’t slag me any more about having an underage gold medal!”

Jason beat Romanian Bogdan Juratoni, the No2 seed, in a pulsating final of the 75kg middleweight division.

“The plan was to go in and win the first round and it worked from there.

“I beat the No1, the No4 and the No2 to win and it doesn’t get harder than that, so it makes it so worthwhile to win gold.”

He may be coming home with two black eyes for his troubles but that won’t matter to the people of the Twin Towns.

Donegal Daily can reveal that Jason will be a special guest at a homecoming parade on Monday with the Finn Valley Sports Centre expected to host the event.

But there will be a homecoming in Dublin first – this evening at the airport.

The ten-man Irish squad are due to arrive home via Dublin Airport at 7.40pm.

Nevin also scooped the Boxer of the Championships award in the Belarusian capital.