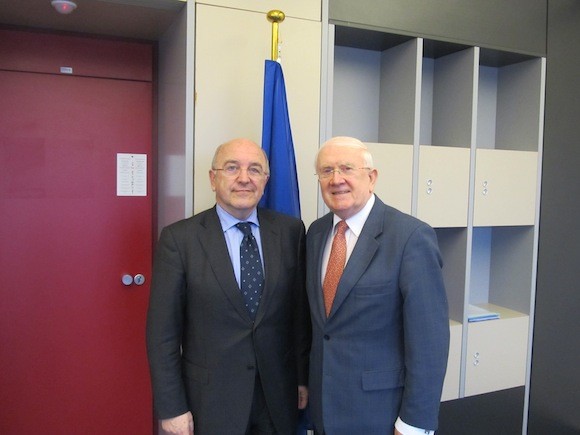 Pat the Cope Gallagher MEP is pictured with the EU Commissioner for Competition, Joaquin Almunia

Ireland North West MEP Pat the Cope Gallagher has reacted to the decision by the European Commission to publish new guidelines on how EU Member States can grant investment aid to companies in order to support economic development in peripheral regions across the EU including Donegal.

The new guidelines were published this week following a decision by the College of EU Commissioners.

Pat the Cope described the new guidelines as “a vast improvement on the original proposal put forward by the Commission”.

The Donegal MEP stated that “there was great concern, within the Irish Government and the various State agencies responsible for attracting new investment into Ireland including Údarás na Gaeltachta and the BMW Regional Assembly, when the Commissioner for Competition, Joaquin Almunia first published his draft document. As a result, I requested an urgent meeting with the Commissioner in March to discuss his ideas.”

“He originally wanted to prohibit aid to large companies in so called “c” regions which would have essentially prevented the Irish Government from providing incentives to companies interested in setting up new businesses throughout Ireland. This would have serious consequences for Ireland as often new facilities or plants established would be part of a larger international company with more than 250 people employed.

“This situation was untenable due to the current economic climate and I was also familiar with several Irish based companies which may not have established bases without the help of investment aid. Furthermore, investment aid is still very much needed in Ireland to address deep rooted regional problems such as geographical remoteness, poor connectivity and infrastructure.

Mr. Gallagher concluded: “I would also like to pay tribute to the Irish Commissioner Máire Geoghegan-Quinn for her efforts to ensure the continuation of investment aid for companies in Ireland.”