HUGE CROWD MARCH TO SHOW THEIR OPPOSITION TO ABORTION BILL 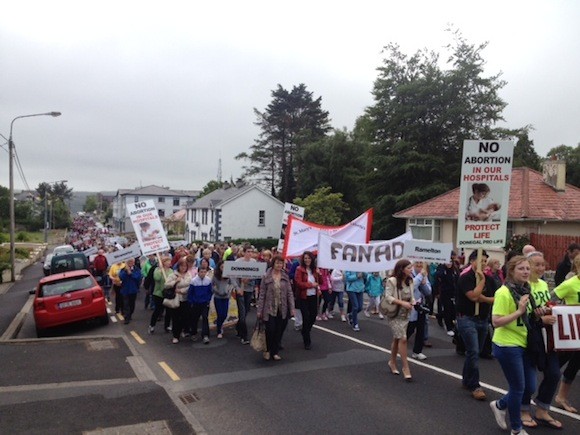 More than 1,000 people marched in Letterkenny yesterday to show their opposition to the Abortion

More than 1,000 people marched through Letterkenny yesterday for a special vigil against the current abortion Bill.

St Eunan’s Cathedral was bursting at the seams causing an overflow outside.

People gathered from across the county to show their resounding opposition to the proposed legislation.

Although there were none of Donegal’s TDs present, a number of councillors attended including outgoing Mayor Frank McBrearty who marched at the top of the protest.

The crowd quietly walked through the town, flying flags and holding banners as the chatted along.

According to Fr Eamonn McLaughlin, one of the organisers, the speakers were “inspirational” with their “enthusiasm for the life of mothers and the unborn, and also challenging in their stark message about this legislation and its gruesomeness.”

The legal expert on the panel, Caroline Simons, said the “grave injustice and deceit that this piece of legislation entails and how it is does nothing to support or enhance the safety and well being of mothers and their children.”

Senator Ronan Mullen began by paying tribute, to a sustained applause, to women who have been “hurt by abortion and who are now speaking out.”

He said: “These women are the true unsung heroes of the abortion debate.The prolife movement  is a resounding YES to life and to mothers and their children. Our NO is to hurt, pain and loss of life”.

“We should expect support for our values from our local TDs and Senators, but they remain silent,” he said.

He encouraged all to be “courteous and respectful” to their TDs but “let them know that we do not support the legislation and that we will be around for the next election.”

He went on: “Anyone who says that there is no effect to women mentally or emotionally as a result of an abortion, could not have been proven more wrong after hearing the personal testimony from Kathleen, of ‘Silent No More’, a brave and emotional young woman who, in tears, shared her hurt, pain and healing after having aborted her own child in the UK, many years ago.”

Bernadette Smyth encouraged all to “never lose hope, to be strong in faith and to know that, although we are doing what we can for the unborn and their mothers, that it is God’s fight in the end.”

Ms Smyth claimed that as a result of their campaign “the Marie Stoppes in Northern Ireland is the only Abortion Clinic in the world that does not and cannot provide abortions.”

Medical veteran Dr John Monaghan Obstetrician from Portiuncula Hospital in Ballinasloe said: “Our Taosieach states that this act does not introduce abortion, and that it is simply fulfilling a requirement of the Supreme Court.

“This is not true. For the first time, at least since the death penalty was abolished in this country, somebody like me, is mandated to directly kill another human being. The Minister for Health said last week: “It is clear in the law – a woman in this law has a right to have a termination where life, as opposed to her health, is at risk. That does not confer any right on her or anybody else to end the life of the baby. The baby will be supported – and if it’s viable, that baby will be born.”

Of the various methods used to carry this out, the Dr said that for children nearing viability, the recommended practise is to lethally inject the baby’s heart using potassium chloride, the same drug used in lethal executions.

The government has proceeded, he said, with the suicide issue despite the overwhelming evidence of lack of benefit to women during the many days of Oireachtas hearings.

“There is overwhelming evidence of this clause being abused in every country where is has been introduced. I know of no country where it has not been widely abused. And the Minister for Health has recently conceded that the new laws would probably result in more babies being delivered having suffered damage due to their premature delivery.

“Am I living on planet earth?’, exclaimed the medic.

He went on to point out that “if a baby is born at 24 weeks of pregnancy, there is at least a 20% chance that it will be left with a permanent disability such as cerebral palsy or blindness.”

Fr Eamonn McLaughlin added “As one passerby in the park asked: what’s the celebration? I responded: you and me. Simply the joy of living.”