NEW APPLICATION MADE TO OPEN ‘AMUSEMENT ARCADE’ IN LETTERKENNY

A new application has been made to open an ‘amusement arcade’ in Letterkenny. 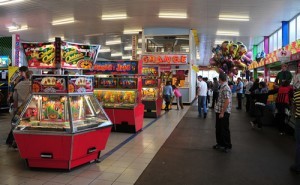 The latest plan to the local town council is to change an existing retail outlet at Ballyraine Business Park into an amusement arcade.

The application, which also includes a change of signage at the front of the premises, is before the council.

The plan has been forwarded in the name of Darren McGarry with an address at 5 Grey Rocks, Milford.

It is not known at this stage if the arcade includes plans to install controversial poker machines.

It is expected that the council will ask for further information as to the nature of the application when it meets next Monday, July 8th.

The council recently shot down plans to change the old Gleneany House Hotel at Port Roundabout into an amusement arcade.

Cllr Gerry McMonagle said at the time that he was completely against such plans.

He said this kind of development was not in keeping with the town plan.

He also publicly stated that such establishments only led to social problems such as gambling issues.