The jerseys have been washed, the sandwiches made and the car is filled with diesel. 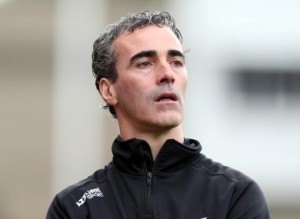 Some 15,000 Donegal supporters are expected to make the trip to Clones to see their team make history (throw-in 4pm).

But while every pundit this side of Croke Park are tipping Donegal to steamroll their way on, Jim McGuinness is trying to keep his team’s feet on the ground.

The Glenties man has spoken of Monaghan’s huge hunger to take Donegal’s scalp and win Ulster.

“I know myself how hungry we were in 2011 and how ravenous we were to get over the line, to just win that Ulster championship,” he said.

“We hadn’t had success in the county for 19 years and we were desperate to win an Ulster medal.

“A lot of our players would have happily retired with one Ulster championship – that is the reality.

“Monaghan are coming to come with a ‘this is the moment we have been waiting for’ attitude.

“And that is a big, big challenge for us to face down.”

With Monaghan having one of the biggest sides in the championship, Donegal knows it’s going to be a war to come out of top.

Donegal have only averaged 14 points this season but Murphy, McFadden and McBreaty could change all that today.

Could Donegal be joining Cavan, Down and Armagh as the only teams to win three-in-a-row?

We certainly hope so! Cmon Donegal!

NICE AND THREE-SY DOES IT BUT MCGUINNESS WARNS ABOUT MONAGHAN HUNGER was last modified: July 21st, 2013 by Stephen Maguire
FacebookTweetLinkedInPrint