PARTS OF LETTERKENNY HOSPITAL MAY HAVE TO BE DEMOLISHED

Parts of Letterkenny General Hospital may have to be demolished and rebuilt as the fall-out from Friday’s flooding continues. 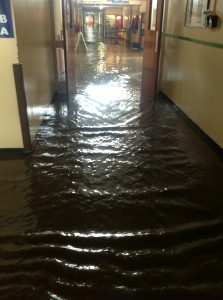 A meeting of hospital management yesterday heard that parts of Floor B at the hospital are so badly damaged that they may have to be knocked down.

A source at the hospital said the public simply don’t realise how serious the situation is.

“A lot of people think it was mainly the new accident and emergency department that was flooded but it wasn’t.

“Almost half of the hospital was under water and the place is a mess.

“It’s very sad to see it and the amount of equipment that has been destroyed is horrendous.

“The places look like it was hit by a tornado. The water is gone but the mess left behind is horrible,” said the hospital worker.

Only the most serious cases including cardiac emergencies and road traffic accident victims are being admitted to the hospital.

Altnagelvin and Sligo General Hospitals will continue to see the majority of patients needing treatment.

Taoiseach Enda Kenny last night admitted that it could be a long time before the facility is back to normal.

The estimate for damage to the hospital is now running into millions.

More than 500 volunteers have gathered at the hospital in recent days to help with the clean-up.

However there is much public disquiet as to how the hospital was allowed to be flooded just weeks after it was first flooded – before the new €22M A&E was opened.

PARTS OF LETTERKENNY HOSPITAL MAY HAVE TO BE DEMOLISHED was last modified: July 29th, 2013 by Stephen Maguire
FacebookTweetLinkedInPrint
Tags:
FLOODINGLetterkenny General Hospital