EMOTIONAL MANAGER PROMISES TO REBUILD A BETTER HOSPITAL AFTER FLOODING 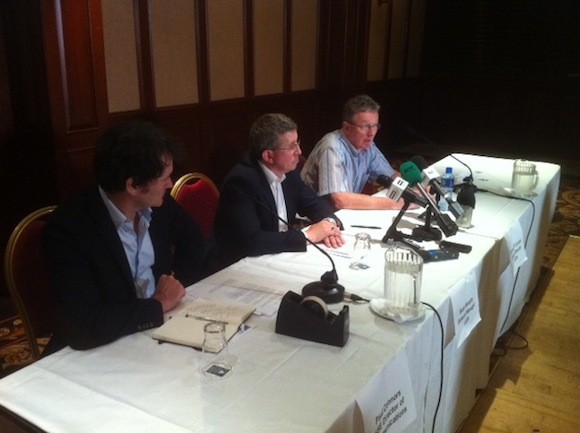 The general manager of Letterkenny General Hospital has promised to build a better hospital in the wake of last week’s flooding which has literally destroyed the current facility.

Speaking at the first press conference since Friday’s disaster, Mr Sean Murphy admitted that the hospital faces a huge challenge.

But he assured staff that all their jobs were safe despite the need to downgrade services.

“We are trying our best aided by an amazing response from our staff but it will take several months to get everything back to normal.

“But we have lost a significant proportion of our hospital. About 40% of our hospital has been flooded with contaminated water and that doesn’t mean it can be addressed with a mopping up operation,” he said.

Paul Connors, HSE Director of Communications, said an external investigation carried out by a group of civil engineers was now being carried out as to why the flooding occurred.

When that is made known, a full report will then be commented on.

Mr Murphy added that at present trucks were rolling in from across Ireland the UK in a bid to recreate services at the hospital.

He also revealed they were working on the setting up of a temporary accident and emergency department but could not say when this will open to the public.

He singled out the radiotherapy unit as being perhaps the most severely hit area.

“We have virtually no radiological capacity but as we speak trucks are trundling across Ireland and the UK to get that capacity back up,” he said.

But he said several services such as the fracture clinic has now been transferred to Donegal Town.

At present people with medical issues form across Donegal are being sent to both Altnagelvin Hospital in Derry and Sligo General Hospital.

However both are finding it difficult to cope with the increase patient-load.

Dr Paul O’Connor, Head of Clinical Services at Letterkenny General Hospital, advised people to go to their local G.P if they have an issue and they will advise them from there.