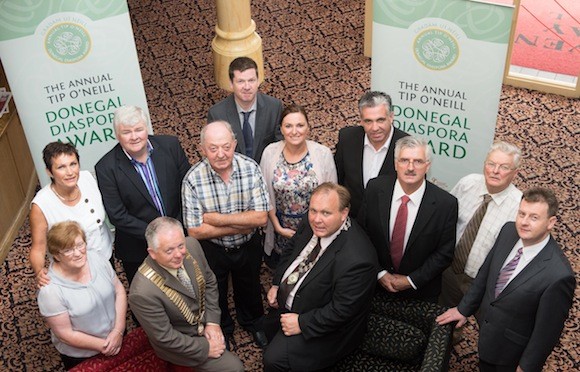 The award and related events are being coordinated by Buncrana Town Council and Donegal County Council to honour one of Donegal’s most famous descendants, Tip O’Neill, both for his outstanding achievements in American political life and especially for his invaluable commitment to the search for a lasting peace on the island of Ireland.

The weekend of the 20th and 21st of September will be devoted to Tip O’Neill, with a busy weekend of activities, including the presentation of the Tip O’Neill Diaspora Award. On Friday, the 20th of September, before an invited audience at the Inishowen Gateway Hotel in Buncrana, the award will be presented to Brian Schweitzer, a prominent member of the present day Irish Diaspora.

Brian Schweitzer was elected governor of Montana in 2004 and re-elected in 2008. Schweitzer first entered politics in 1993, when President Bill Clinton appointed him to the U.S. Agriculture Department Farm Service Agency Committee. He served at the USDA for seven years. Schweitzer was chosen as a keynote speaker at the 2012 Democratic National Convention. He has chaired both the Democratic Governors Association and the West Governors Association.

Brian Schweitzer has strong Irish connections. Hannah Friel, Brian’s mother, was born in 1899 and left Rathmullan for America with her sister Mary Ann, while in her early twenties. Schweitzer has maintained close contact with Donegal and has a keen interest in the county and its people.

The Mayor of Buncrana, Cllr Peter Mc Laughlin, welcomed the prestigious Tip O’Neill Irish Diaspora Award and all the positive cultural, heritage and enterprise events that are developing and progressing in the North West from its preparations and management.

Mr John Mc Laughlin, Buncrana Town Manager, remarked that “the annual ceremony recognises the success of a member of the worldwide Irish Diaspora in their field of expertise and Brian Schweitzer is a very worthy recipient.” Mr Mc Laughlin also stated that this initiative will add greatly to the overall Donegal Diaspora initiative which is reaching out to people online, in Donegal and to all parts of the World.

County Manager Seamus Neely also stated that “The Tip O’Neill Diaspora Irish Diaspora Award was a key element of the Donegal Diaspora Project which is reaching out to people with a connection to or interest in Donegal no matter where in the world they may be living.

He stated that Governor Schweitzer is an excellent example of the Donegal Diaspora being a grandson of a woman who emigrated from Donegal early in the last century and has achieved the highest level of government and public service in his home state of Montana and indeed who has achieved prominence in the wider united state context.

County Mayor Ian Mc Garvey welcomed the announcement with regard to this year’s recipient acknowledging the great work Schweitzer has carried out for the people in Montana during his two terms of state and also recognising the close connections he maintained in Donegal.