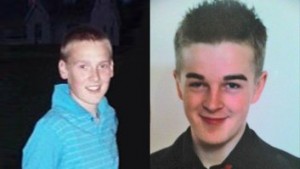 THE town of Letterkenny was in mourning today as the funerals took place for the two young men killed in the weekend car crash outside Rathmullan.

Shaun Graham was laid to rest after noon Mass at St Eunan’s Cathedral.

At 3pm Matthew Crawford was buried after Mass at the Church of the Irish Martyrs.

Hundreds and hundreds of family and friends attended both funerals.

Fr Éamonn McLaughlin told mourners at the funeral for 19-year-old Shaun that his parents had been overwhelmed by the good wishes of the people of the town and county following the tragedy.

Among the mourners was Damian Gallagher who was in a wheelchair after also being injured in the crash.

The driver of the car Noel Carr remains in a Dublin hospital where he is being treated for his injuries.

Fr McLaughlin urged young people to be “agents for change on our roads.”

He said everyone had a duty to make Donegal’s roads safer to prevent future tragedies.

The priest also said Shaun’s parents Michael and Caitriona were like all parents who worried when their children went out.

Young people, he said, should do everything to be safe when they were out at night.

Fr McLaughlin then travelled to the second funeral in Letterkenny for Mr Crawford where mourners heard Fr Brian Quinn say that people were struggling to come to terms with the weekend tragedy.

Afterwards a friend of Matthew’s said: “They were just boys; always happy and always smiling. I’ll never get over it.”