DONEGAL BUSINESS PEOPLE COME OUT OF THEIR SHELLS 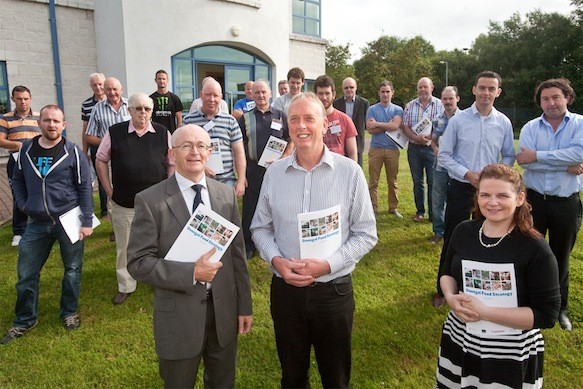 Donegal’s Shellfish Producers who came out in force to consider the potential of the Donegal Food Strategy to their sector.

Donegal’s exciting shellfish industry has taken some first steps in a process that local producers hope will see the sector grow and develop in the county.

Over thirty commercial producers from the aquaculture sector attended a recent workshop on Depuration (a process of purifying the shellfish from impurities) and what it means for local Donegal Shellfish producers.

They are hoping now to build on that process to take steps to develop the industry further in the county.

The event was organised by The Food Coast – Donegal’s Good Food Initiative, which was developed by Donegal County Enterprise Board.

In his address he explained to the Donegal producers about the challenges the Scottish group had faced and how they worked collectively to develop opportunities.

Louise Collins from BIM meanwhile demonstrated the importance of aquaculture to the economy of the county, explaining that Donegal is producing nearly a third of all aquaculture products in Ireland.

“In terms of licensed areas, value and tonnage of species, and in terms of the number of people working in the sector it is in the number one aquaculture region in Ireland,” she said.

“Pristine growing waters, good sheltered bays and great people that know how to work with the sea all make this a valuable contributor to the economy. The flagship species of this region are salmon, mussels, clams, sea trout and scallop and in excess of 400 people are employed in the industry,” she added.

Indeed the BIM executive highlighted the value of aquaculture as a whole to the economy explaining that in 2012 producers farmed nearly 37,000 tonnes of product with exports of €133 million and around 1,700 employed around our coasts.

And she said, aquaculture in the north western counties of Donegal and Sligo make up the largest producing area of aquaculture in Ireland with 7,000 tonnes of shellfish produced in 2012 and in excess of €32 million in exports.

Eve-Anne McCarron, Business Executive with the Food Coast who organised the event said she was delighted that so many producers in the county had attended to listen to the speakers and indeed to express their aspirations on how the industry could be developed in Donegal.

“The event was very much about creating the opportunity to share knowledge and discuss the future of the aquaculture sector in Donegal and it was fantastic to see such a huge interest.

“The attendees included both large and small scale producers and they all have a huge part to play in the sector here because it is when they are all combined that makes Donegal such a strong producer base. We now have a list of actions to be carried forward that include challenges and opportunities and we will be working together to try to develop and progress the sector in Donegal,” she said.

The meeting was just one of a number of key actions being progressed by Donegal Food Coast who have the role of acting as a central platform for establishing Donegal as a “food county” – a place with a vibrant food culture and food economy.

Eve Anne explained that as part of that strategy, The Food Coast has been building stronger links with the local seafood sector, adding they would be hosting a number of events offering the opportunity to discuss the challenges of the sector and encourage activity.

“Our aim really is to make this sector stronger and more commercially sustainable and I think we’ve really taken great first steps on that journey after that successful gathering of so many interested parties in Donegal,” she concluded.