Two of the former Lafferty premises in Creeslough currently in liquidation are being been put on the market by RSM accountants and tax advisory service in Dublin. 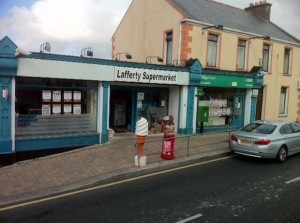 This is the latest chapter in the ongoing saga that began last February when Danny Lafferty first sought High Court protection from creditors.

The Tirconail Tribune reports that Lafferty’s Supermarket and the renowned Corncutters Rest are being sold by private treaty and will be advertised in the coming weeks.

The shutters finally came down on these premises on June 11th after the High Court appointed Helen Dwyer as liquidator replacing the Letterkenny firm of Farren and Roarty.

An hour later a security firm arrived into Creeslough in strength to give effect to the court order of Mr. Justice Peter Kelly.

Less than two weeks earlier the Lafferty premises were put into liquidation and wound up.

A spokesman for the selling agents told the Tribune they expect a strong interest in the properties given their location in a commercial setting.

While a reserve price for the Corncutters has yet to be agreed we understand the auctioneer will be accepting bids of over €150,000 for the former Lafferty’s Supermarket premises. The sale is by private treaty and the premises are being sold as separate entities.

Lafferty’s has never been far from the news this year: ever since the night March 4th when 1,000 people gathered in the Massinass Hall in a new initiative to ‘Save our Village’ after Danny Lafferty sought the protection of the courts from creditors.

Mr. Justice Peter Kelly had appointed Seamus Farren as liquidator to Lafferty’s Creeslough Ltd in March but only on a provisional basis until June 11th. Later the Dublin based firm of RSM took over and were put in charge of the winding up process in June.

The local community had rallied around the Lafferty family in a “Save our Village” campaign and at a previous hearing. Mr. Justice Kelly noted this support in deciding to grant continuing court protection.

Danny Lafferty had remained upbeat and confident into the summer that the supermarket and pub could have been saved. However on June the 11th officials from the Liquidator’s office converged on the village of Creeslough and the premises were closed within one hour.