NYPD ON WAY TO DONEGAL TO PUT PRESSURE ON ALL-IRELAND CHAMPS!

The New York Police Department is on its way to Donegal! 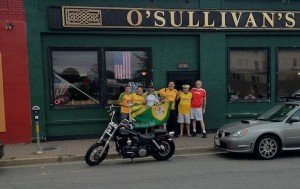 As part of the Donegal Gathering 2013, the NYPD Gaelic Football Club will be flying back to Ireland to play International Tournament matches in Croke Park, Westmanstown Sports Complex and Ballybofey, Donegal.

The NYPD Club has a deep and rich history in the New York City Police Department.

The Club was formed in 1990, to keep Irish heritage alive and raise money for charities.

The Donegal match will be played on Monday, October 7th at 6pm, in Sean Mac Cumhaill Park. Afterwards there will be a Donegal/New York night at 9pm in Jackson’s Hotel.

All proceeds from both events will go to the friends of Letterkenny General Hospital.

President of the NYPD Gaelic team, Peter Mc Cormack states “It is with great pride, that I lead our club in a charity match in my home town of Ballybofey.”

The NYPD will be teaming up with members of the 2012 All Ireland Champions, Donegal, in a match against GPA Legends selection featuring Martin McHugh, Darragh O’Se and Joe Brolly.

Peter Mc Cormack remarked “Our motto, “Keep the Heritage Alive” is our Club’s main focus and we are delighted to be part of the Gathering Calendar in Donegal.”