WOMAN RUSHED TO HOSPITAL AFTER CAR FLIPS INTO FIELD 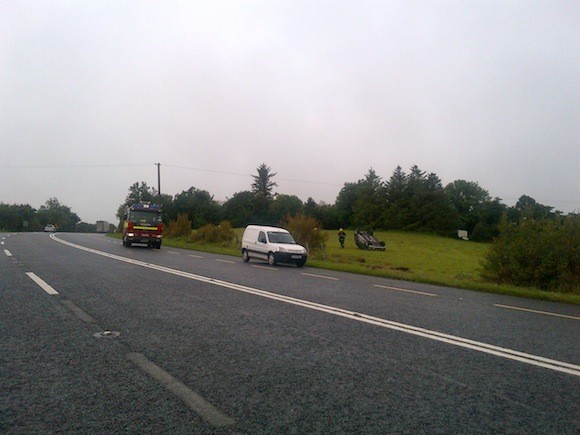 The woman’s car skidded and flipped into a field

A woman has been rushed to hospital after her car skidded across a road and flipped into a field.

The accident happened just before 10am on the main N15 road between Donegal Town to Ballyshannon Road.

Gardai and firecrews are at the scene.

Our picture shows how lucky the woman was to get out of her car at all.

An investigation into the cause of the crash is examining the possibility that the woman may have skidded on oil that was already on the road and then lost control of her vehicle.

No other cars were involved in the crash.

The woman has been rushed by ambulance to Letterkenny General Hospital but her injuries are not believed to be life-threatening.

A spokesman for the emergency services at the scene has appealed to drivers to slow down in the area.

“This is still an accident scene and there is still oil on the road. We are appealing to drivers to slow down.

“It appears there may have been oil already on the road and thankfully there were no other cars coming in the opposite direction or we could have been dealing with a much more serious scenario,” he said.