PLEA TO KILLER: GIVE YOURSELF UP TO GARDAI 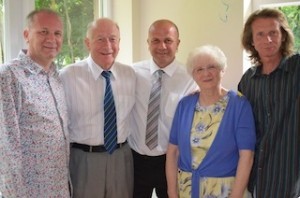 Alan, far right, pictured with his mum, dad and brothers

THE brother of hit-and-run victim Alan McSherry has appealed to his killer to go to Gardai.

Terry McSherry was speaking after the funeral of Alan in Bundoran yesterday where hundreds of mourners heard glowing tributes to the 48-year-old who died on Sunday in a hit-and-run incident near his home.

Alan was found just after 5am on the Newtown Road 4kms from Bundoran by his wife Jo.

“As a family we are appealing to whoever was in this car to come forward, the driver or his or her passengers if there were any,” said Terry McSherry.

“Not only have those responsible ripped one family apart they have also have ripped the community of Bundoran apart.

“They will never be able to live with themselves; the only way we will get closure is if they come forward.”

Mr McSherry said his family and friends in both Bundoran, where Alan and Jo moved to 13 years ago, and in Birkenhead where he was originally from were left devastated by the death.

Gardai are still searching for the car and its driver and the incident.

It’s understood forensic experts are close to identifying the make and colour of the car which hit Alan.

But Terry McSherry wants the driver to come forward.

“He or she needs to give our family closure,” he said.

PLEA TO KILLER: GIVE YOURSELF UP TO GARDAI was last modified: August 30th, 2013 by John2
FacebookTweetLinkedInPrint