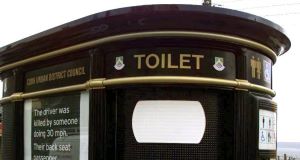 BUSINESSES LOO-SING OUT OVER LOCATION OF PUBLIC TOILETS

Letterkenny Town Council is planning to move its public toilet in a bid to make it flush with users.

Flushing money down the toilet! Council is planning to move Letterkenny loo.

The portaloo is currently located in the car park at Justice Walsh Road behind the AIB bank.

But Cllr. Gerry McMonagle says it’s practically a white elephant and very few people are paying to use it.

Last year it was revealed the town’s two toilets were costing €26,000 to operate – meaning it was costing the council more than €7.40 for each person who tinkled!

The Sinn Fein councillor brought a motion before last night’s meeting asking to move the toilet close to the Port Roundabout.

He said people traveling to and from Dublin are often waiting on buses for ten to fifteen minutes before moving further afield.

“Businesses are being inundated with people asking to use the toilet,” Cllr. McMonagle told the council. He said that this is leading to high water charges for the businesses.

He acknowledged that the council had created the transportation hub in the area, so the responsibility lies on them to provide toilet facilities.

He asked Town Clark Paddy Doherty how much money was being generated by the portaloos but he was unable to provide a figure.

The large amount of third level students passing through the area was mentioned by Cllr. Dessie Larkin, who supported the motion. He commended the council’s work at creating a successful traffic system in the area.

Cllr. McMonagle later told Donegal Daily that the portaloo was not paying for itself in its current setting, as the usage is minimal. He said that the facility would generate more revenue in the carpark at Mr. Chippy.