The annual sponsored kayaking event from Dungloe to Burtonport scheduled for this afternoon has been cancelled due to weather conditions. 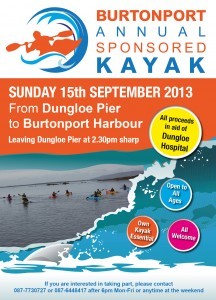 The event was organised to raise funds for the Dungloe District Hospital and dozens of kayak enthusiasts from across the north west had signed up to compete.

Organisers have reviewed the route from Dungloe bay to Burtonport this morning and feel it would be unsafe because of strong wind gusts.

The event has now been rescheduled to Sunday, 29th September at 2.30pm as tides are unsuitable next week.

Participants are collecting sponsorship and your support would be appreciated.