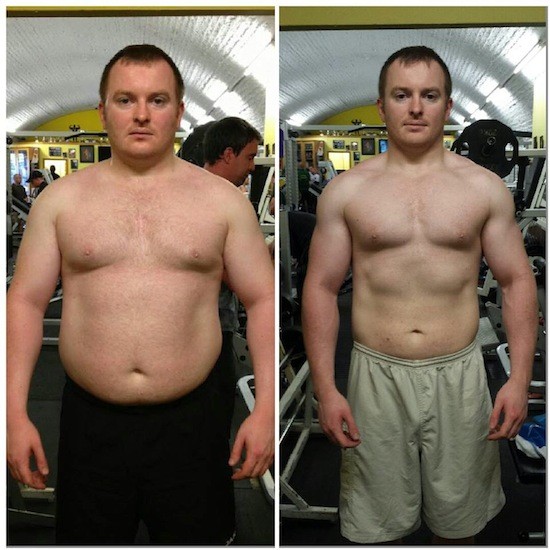 HOW NIALL UNDERWENT AN AMAZING TRANSFORMATION!

Niall’s amazing before and after pictures!

A Letterkenny man has undergone an amazing transformation after admitting he genuinely feared for his life.

The Hawthorn Heights man weighed in at a gut-busting 17.7 stone and had to wear size 38 trousers.

But after putting himself on an intense training and diet schedule, Niall is turning heads after getting into terrific shape.

The 31 year old revealed he genuinely feared for his own health and well-being.

“It got to the stage that I was worried that I was going to develop diabetes or have a heart-attack.

“I just had to do something and I promised myself that I would seek out the right people to help me reach that goal,” he said.

Those people were Seamus Fox and Reece Moore.

Niall went to personal trainer Seamus, who runs the Evolve Gym in Derry, and asked him if he could help him.

He also works with Letetrkenny-based Reece who runs the Fighting Fit Bootcamp.

“Seamus told me that if I was honest with his programme then I could get into good shape and get healthy again.

“I put my faith in him and stuck rigidly to the programme and I’m delighted to say that Seamus was right.

“Without himself and Reece I just couldn’t have done it,” he said.

But getting into the shape of his life wasn’t easy and Niall admits he took him pure dedication and many sacrifices to reach his goal.

He had to weigh all his food each day, eating out was just not on and a grueling training schedule of intense weights and cardiovascular work was included.

“It is not for everyone but I had to do it for myself. There are sacrifices. The idea of having a scone with a cup of tea is just not on,” he said.

Niall says he is delighted that he has reached his goal – especially for the sake of his wardrobe!

“I had a lot of clothes that haven’t fit me for years and I purposefully didn’t throw them out.

“I can now fit into them and I’m delighted with that. But it is not for aesthetics or for other people – this has always been about me and my health,” he said.

He knows he can never keep up this intensity but Niall says he knows what he must do to remain in a healthy weight.

“I can allow myself a little leeway but I now know the science of what I must do to keep myself at this weight.

“I never knew that before but Seamus and Reece showed me how to do that and I will always be grateful for that.

“They showed me it can be done but it does take time and commitment,” he said.