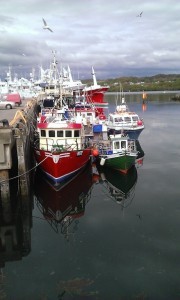 Fine Gael TD Joe McHugh has told the Minister for Agriculture & Marine that the concerns of Donegal fishermen need to be at the top of the agenda at next December’s annual EU Fisheries Council quota negotiations.

Deputy McHugh says that the 2014 quota allocations for haddock, monk, saithe, whiting and pollock in Area VIa are critical to the long-term future of Donegal’s fishing industry.

Deputy McHugh raised the issue in the Dáil with Minister Coveney.

The Donegal TD said: “Minister Coveney will be a capable advocate for Irish fishermen at the annual EU Fisheries Council meeting next December, when the quotas for 2014 will be determined.

“The 2014 allocations must offer hope to the Donegal fishing industry. Haddock, whiting, monk, pollock and saithe quotas for 2014 are critical to the long-term future of the fishing industry in our county. 2013 has been a challenging year for fishermen in our area.

“Minister Coveney needs to ensure that the concerns of Donegal fishermen will be at the top of the Irish agenda in those negotiations. This week during parliamentary questioning in the Dáil Minister Coveney assured me that he will be aiming to ensure a balanced outcome at the EU Fisheries Council meeting in December. Minister Coveney also said that the new Common Fisheries Policy arrangements can provide the basis for a significant period of growth in the Irish fishing industry.

“I will continue to engage with local fishermen and with Minister Coveney between now and the quota negotiations at the end of the year.”