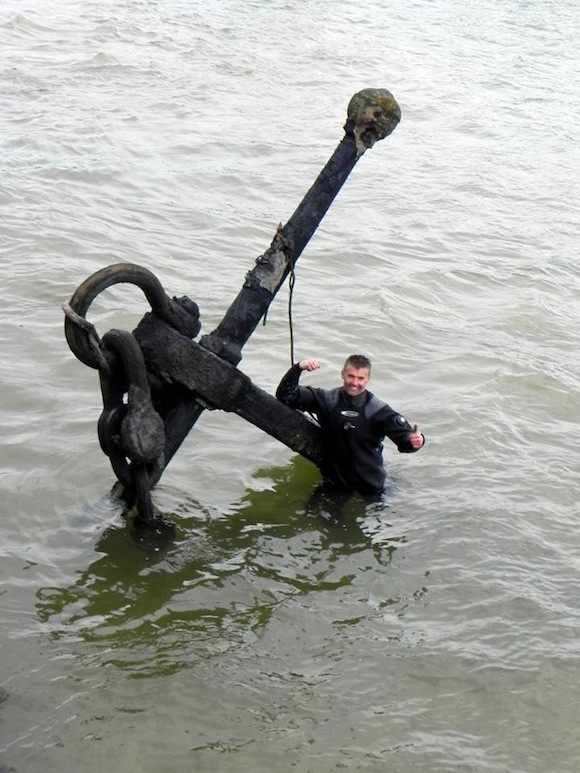 A DONEGAL man caught up in a ball of red tape over a simple gesture for his town has won his battle to put an historic anchor on display there.

David McGloin was hailed a hero after raising a century-old anchor from the muddy waters off Rathmullan.

But within days his efforts to bring it ashore had him caught in a massive legal battle.

And at one stage he was threatened with a fine and imprisonment by heritage bosses in Dublin.

David however decided to prove who owned the anchor – and set about getting the permission of Britain’s Royal Navy.

The six-tonne anchor was made by the company Hingley Hetherton in 1908 – the same company which made the anchor for the Titanic just a few years later.

And this monster was used for ships from Britain’s Royal Navy which used the pier in Rathmullan during World War One.

David, from the Sheephaven Sub-Acqua club, spotted the anchor two years ago whilst working on helping gardai during a search of the area.

However he was threatened with legal action unless he returned the anchor to the waters of Lough Swilly – so he did.

“I got in touch with the Royal Navy and I went to the North to see a navy commander to discuss the anchor,” David told Donegal Daily.

“He was shocked that I had been threatened with legal action and the Royal Navy has now given me the rights to it.

“I’ve tucked it away under the sea so it should be easy enough to get it out again.

“So the anchor will be back on dry land shortly and it will be put on display in Rathmullan.

“I think everyone will be happy with the decision. Good to see common sense prevail – in the end.”