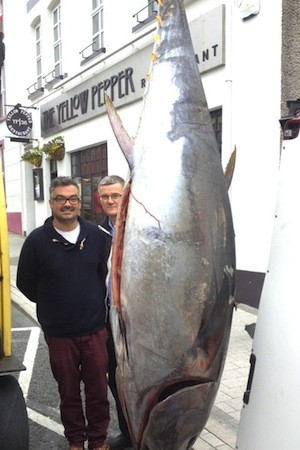 There’s something very fishy going on with two of Donegal’s top restaurants but it’s all for the good.

Kelan McMichael and Kieran Davies with the huge fish.

Letterkenny’s Yellow Pepper and Rathmullan House Hotel have joined forces to buy a massive tuna fish which was caught off Portnoo in recent days.

The monster fish, weighing more than 300Ibs, was landed by Donal McMenamin off Portnoo.

Now the two well-known eateries have come together to pay a ‘four figure sum’ for the monster of the sea.

Kieran Davies, from the Yellow Pepper, estimated they will be able to get 500 portions from their share of the giant tuna.

And he says he is delighted to be able to support local suppliers – as well as the angling industry!

“It’s a beautiful fish and our chefs are planning all sorts of dishes with it. We hope to have it on the board as soon as possible.

“Personally we try to source up to 90% of our produce locally from the north-west region,” he said.

“It is super fresh because it is only two days old, it was line-caught so there was no dragging of the ocean floor and it’s just a great piece of fish.

“I’m very excited by it and we’re going to do so much with it from sushi to char grill.

“We’re going to have this on the menu tomorrow night and our customers are going to love it,” he said.