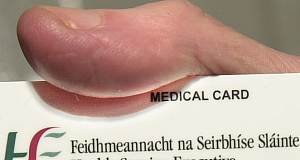 MEDICAL CARDS ARE BEING SLASHED ACROSS DONEGAL CLAIMS DEPUTY

Medical cards are being slashed across Donegal.

The Fianna Fáil Deputy said the cuts are affecting numerous people with serious illnesses and disabilities.

He said his constituency office has been inundated with cases where people with cancer, severe disabilities or debilitating illnesses have been refused a medical card or had their card revoked over the past few months.

This week in the Dáil, the government rejected a Fianna Fáil motion deploring what the party describes as ‘deliberate targeting of sick people in need of clinical support’.

The motion called on the government to stop these ‘underhand cuts’ to discretionary medical cards and to ensure that no-one in clinical need is denied a medical card.

Deputy McConalogue said, “It is disgraceful that the government rejected this motion. The government is denying what is clearly happening on the ground. Figures show that nationally, more than 1,000 discretionary medical cards are being withdrawn every single month.

“I have been dealing with many cases in Donegal of cancer patients, children with severe disabilities and people with serious illnesses being denied medical cards or suddenly having their cards revoked. How can the government deny that cuts are taking place under the radar?

“There is no doubt that there is a cynical campaign to reduce the number of medical cards in use in Donegal and across the country. This is the worst kind of cost-cutting tactic. The Health Minister James Reilly has once again failed to manage his own health budget this year, and it’s becoming increasingly clear that he is expecting to cover some of that budget overrun by removing supports from sick people who otherwise would be entitled to a medical card.

“The government representatives in Donegal can deny this all they like, but the bottom line is that it is happening in communities right across this county. People with serious conditions here in Donegal are being denied medical cards and we need to know why.”

Deputy McConalogue called on the local government representatives to stand up for Donegal patients and demand a stop to these cuts.

“This attack on sick people must stop. I am calling on the local Fine Gael and Labour representatives here in Donegal, who must be receiving as many of these cases as I am, to tell their colleague the Minister for Health James Reilly the reality of what is happening and to put a stop to the sneaky cull of discretionary medical cards,” he said.