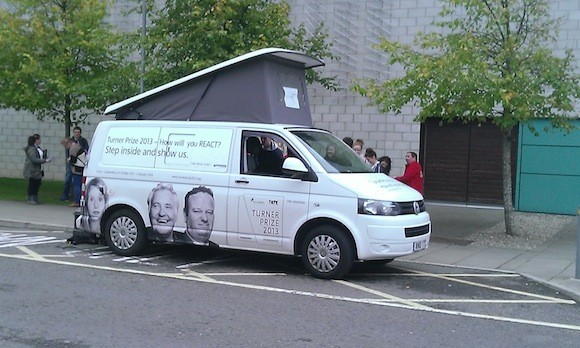 A FRIED EGG OR A LAWNMOWER – TURNER PRIZE COMES TO DONEGAL!

The Turner Prize mobile Unit at the LYIT (or is it a corncrake on wheels?!)

Was it a fried egg, an artistic masterpiece or a lawnmower?

That’s the kind of confusion, interpretation and wonder the Turner Prize exhibits has created.

As Derry/Londonderry gears up to host the Turner Prize 2013, a mobile art studio will tour Northern Ireland and Donegal to capture local people’s reactions to contemporary art.

The REACT mobile studio was on campus at LYIT last Thursday to gauge reactions from students, staff and local Donegal people.

This is the first time the Turner Prize has left England.

The aim is to bring contemporary art to local communities and to encourage debate. Everyone was invited to be photographed as they reacted to the shortlisted artists and previous prize winning exhibits.

The aspiration of the “Tour” is that it will introduce the Turner Prize 2013 to a fresh audience of all ages and backgrounds. Bringing the work to central places within communities will hopefully show that contemporary art is for everyone to enjoy and engage with.

The exhibition opens on Wednesday, 23 October, in the former Ebrington military barracks in Derry~Londonderry. All welcome.

Laure Prouvost is nominated for her new work Wantee commissioned by Grizedale Arts and Tate for inclusion in the exhibition Schwitters in Britain at Tate Britain, and for her two-part installation Farfromwords made for the Max Mara Art Prize for Women. Prouvost revels in the creative possibility of miscommunication and translation between art forms and languages. Her unique approach to filmmaking offers fragmented fictions and uses quick cuts, montage, sound and text to create surprising and unpredictable work.

Tino Sehgal’s work takes the form of live encounters between people. The participatory nature of work means creates a strong sense of personal engagement among those who experience it. Seghal is nominated for his pioneering projects This Variation at Documenta (XIII) and These Associations at Tate Modern.

David Shrigley is best known for his simple and direct drawings and animations that make satirical comments on everyday situations. Shrigley is nominated for his solo exhibition at Hayward Gallery, David Shrigley – Brain Activity, which offers a comprehensive overview of his work. The collection of much-loved drawings, photography, sculpture and film revealed the Scottish artist’s black humour, macabre intelligence and infinite jest.

Lynette Yiadom-Boakye has been nominated for her exhibition Extracts and Verses at Chisenhale Gallery. Yiadom-Boakye is a painter, poet and writer of Ghanaian descent. Yiadom-Boakye is best known for her large-scale paintings of fictional characters, which she creates from memory and scrapbook gatherings. She unintentionally pushes perceptions by having predominantly black subjects within her work.