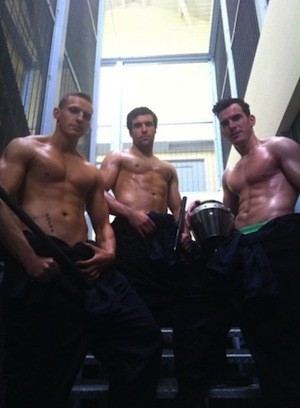 FORMER DONEGAL STAR GOES THE ‘FULL MONTY’ FOR A GREAT CAUSE

A former Donegal GAA star has done a ‘Full Monty’ in support of the Irish Cancer Society. 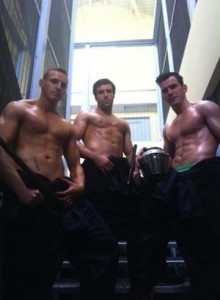 Michael Doherty (extreme right) looks like he could still line out for Donegal!

Michael Doherty, from the Four Masters Club, was a renowned free-kick taker in his day.

Now he could easily be mistaken for one of The Chippendales!

Michael, who works as a prison officer, has also been working hard on getting toned up to take part in a fund-raising calendar.

And it certainly shows!

Derek Walsh, who’s one of the organisers, said the Irish Prison Service is completely behind the effort, and that the men involved volunteered their time for the cause.

He said that the photoshoot involved a “lot of baby oil, a lot of fake tan, a lot of ‘manscaping’” and revealed that “some of the lads were working out right up until the start of the shoot”.

Props like truncheons and riot helmets appear to have been used in some of the images, and Walsh said that more will be revealed when the calendar goes on sale in the coming weeks.

Needless to say there could well be a run on the calendars about Donegal Town way!