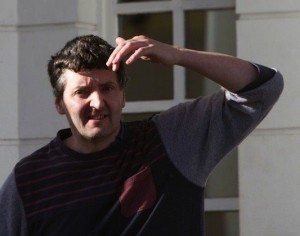 John Doe, aka Daniel Greene has fled the house.

GARDAÍ have cleared the Co Donegal house at the centre of an ownership dispute.

A couple known as John and Jane Doe – now known to be Daniel and Marieka Green – have vacated the bungalow at Rooskey, Newtowncunningham, following a ‘final warning’ court order at Letterkenny Circuit Court yesterday.

Others believed to have been on the premises are no longer there.

Gardaí have now secured the house.

The Greens took over the house earlier this year after failing to buy the property.

Several judges had signed orders for them to leave; but they had refused.

However facing a jail sentence for failing to move, they finally pulled out of the property last night.

Judge Petria McDonnell had signed warrants this week making the removal of the Greens final.

They still have to appear in court on October 29.

The house belonged to the late Rev Sam Reede. It was left in his will to Charles Reede, his brother, who wants to sell the house and donate the proceeds to local charities.