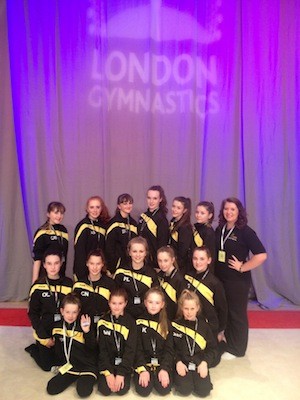 A DELIGHTED Donegal gymnastic team are on their way home with silver medals after an amazing performance at the prestigious London Festival of Gymnastics.

The Letterkenny-based Finesse Gymnastics Display Team – 15 Donegal gymnastics ages 8-17 along with team coach and choreographer – are from all over the county.

They train under the direction of team coach, Meganne Herron and team choreographer Linda Bennett.

The girls qualified for the London festival of gymnastics back in May 2013. This qualification selected the top 60 teams from hundreds of teams across Ireland and Britain.

The Finesse Team are the second ever Irish team to make the final stage of the festival.

The team travelled to London on Friday last to compete in the event where over 1400 gymnasts participated. They competed against extremely stiff competition from across Britain and Ireland.

The gymnasts performed to the very best of their abilities and executed an outstandingly solid and precise routine.

Their wonderful performances led to event co ordinator, president of London Gymnastics approaching team manager, Tony King to inform him that the team had caused quite a stirr amongst other teams and coaches.

This positive feedback was overwhelming. After this boast of confidence the gymnasts eagerly awaited the final results.

The gymnasts were awarded with silver medals for their performance of their routine; Alice in Wonderland, just behind England’s Spirit who are coached by the same coaching team as Britain’s Got Talent winners Spellbound.

This placing was accredited to Finesse’s execution, precision and clarity of theme throughout their routine. This is a huge feat for this young team especially as they are the first Irish team to receive this accolade.

The team now are looking to set their sights on Europe and are aiming to qualify for European Championships in Italy in July 2014. Who knows what the future may hold for this young and talented team of girls!!!