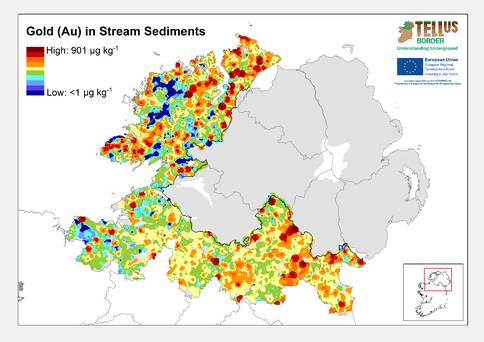 New areas of Donegal have been indentified today as having concentrations of gold.

Termon and several areas of the Inishowen peninsula were for the first time revealed to have the valuable element. Previously known gold concentrations were also highlighted in Glencolumbkille. The concentrations were described as being at standard levels.

These revelations came from findings in the Tellus Border Project, a major mapping project which involved the collection of scientific data on soils, waters and rocks across the border counties of Ireland.

The project produced a gold map which is the most extensive dataset of gold in regional stream sediments completed in Ireland to date.

Minister for Natural Resources, Mr Fergus O’Dowd TD said that the gold map, along with other maps released today, will add to economic investment already beginning in the Border area.

The map set also shows high radon risk areas in the border counties. New areas of Donegal were identified as having high radon levels. The findings will allow the areas to be targeted for further investigation and ultimately the protection of public health from radon risks in the long term.

Deputy O’Dowd welcomed the new data. “It’s fantastic to see data emerging which will have a positive impact on the region’s environmental and agricultural sectors – as well as our health and economy – for years to come.”