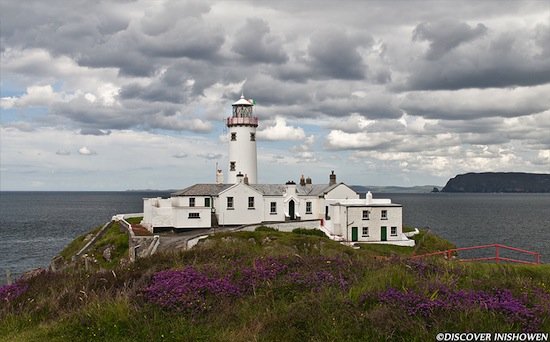 Fanad Lighthouse in all its splendor!

The development of Fanad Head Lighthouse as part of an all-island tourism trail has the potential to attract 60,000 visitors per year, claim the Commissioners of Irish Lights.

It is expected that half a million Euro will be invested in developing amenities there over the next two years.

The All Island Lighthouse Trail project, led by the Commissioners of Irish Lights (CIL), will see key operational lighthouse facilities also made available for specialist tourism accommodation and attractions.

Phase 1 of project involves five sites, three in Northern Ireland and two in Donegal. These will be added to the six sites already operating in the Republic with the eventual plan being to have between 15-20 lighthouses operating as part of a tourist trail all around the Irish coast.

Fanad Head and St. John’s Point Dunkineely have been selected from Donegal’s eleven lighthouses to be part of the project.

Fanad Head was built in 1817 and St. John’s Point in 1844 and both are among Donegal’s most spectacular locations.

Phase 1 of the project involves five sites, three in Northern Ireland and two in Donegal.

These will be added to the six sites already operating in the Republic with the eventual plan being to have between 15-20 lighthouses operating as part of a tourist trail all around the Irish coast.

In Fanad the local lighthouse committee has made significant progress in the proposed development of the Lighthouse as a visitor facility.

According to today’s Tirconail Tribune, the steering committee has drawn up a proposal with assistance from the Council, which was submitted to the Commissioners of Irish Lights.

This proposal envisages the provision of a coffee shop, a gift shop, exhibition area and tourism information.

Mr. O Connor has met with the Fanad Lighthouse Committee and informed them that the CIL is very happy to facilitate their proposal and is hopeful that design teams will meet with the Fanad group in the very near future.

There are decisions yet to be made on the provision of accommodation facilities but negotiations are ongoing at this point.

Mr. O Connor outlined that the Commissioners of Irish Lights envisage that the Fanad development has massive potential and they are confident that it can become a major tourism attraction for the county.

Comparing it to the Visitor Facility in Mizen Head which attracts in the region of 60,000 visitors per year, the Commissioners of Irish Lights are optimistic that the Fanad project can be of this scale.

The Lighthouse has been to the fore in local and international media recently when it was voted as one of the top 10 most beautiful lighthouses in the world in the online magazine Mental Floss.

On the national tourism front Fanad Head has been identified as an ‘iconic viewing area’ along the Wild Atlantic way, one of only 15 in the country and one of only three in Donegal along with Sliabh Liag and Malin Head.

Failte Ireland has already recorded film footage abseiling from the lighthouse tower and this will be part of its promotional material.

To make the peninsula viable as a tourism destination the Fanad Head Lighthouse committee will be seeking the communities support in facilitating a community employment scheme to help improve our lay-bys, beach access points etc.

This scheme will be reliant on the support of local volunteers to assist in whatever way possible and further information will be provided in the next few months.