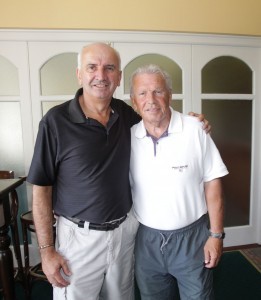 Collins – pictured with one of those pundits!

Collins, bidding to take over the Highland airwaves in a broadcasting license battle, sparked an online war of words over his own comments.

“So it’s the Martin & Roy show next for the Republic of Ireland we’re told,” said Collins on his Facebook page.

“Two out of work Managers who nobody else seems to want. Why wouldn’t they take the jobs and of course the Money.”

Collins – dubbed Donegal’s Voice of Sport – had plenty of people agreeing with him.

However other soccer fans hit back, saying the appointments would help Ireland move forward.