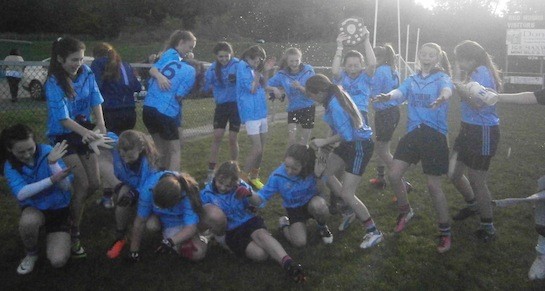 The Ladies U-14 County C Final took place today at the Red Hugh’s GAA grounds between Robert Emmets from Castlefinn and Naomh Padhraic of Muff.

In a very close first half with both sides nip and tuck it was Muff who went in at the break with a two point gap 3-04 to Robert Emmets 3-02.

The management team of Emmets made a few positional changes at half time bringing their full-back Naoimh Mc Granaghan up to the midfield area and the game was then dominated by the girls from Castlefinn.

Catherine Mc Glinchey made some terrific runs and seemingly scoring at will her total was 4-01.

Truda Mc Daid and Naoimh Mc Granaghan controlled the midfield area and Muff where confined to just one point in the second half while all the Robert Emmets girls were growing in confidence and were playing well all over the field scored 3-04.

A gallant effort from Muff but Robert Emmets had a little too much for them.