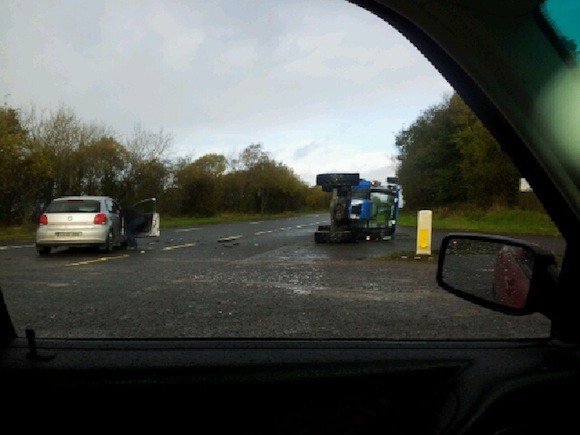 The scene of this morning’s accident in Ballintra.

BREAKING NEWS: GARDAI are investigating the death of a farmer in a road traffic accident this morning.

Officers have sealed off the scene near Ballintra on the N15 close to the Roadstone cement factory.

The dead man in his 50s and lived nearby with his brother and was originally from Scotland.

A toppled tractor was found close to where the body was found in the townland of Derries.

Gardai have informed the county coroner’s office and a technical examination is taking place.

A spokesman confirmed the farmer died at the scene but that the driver of the car was uninjured.

A spokesman said “Gardai are investigating a fatal road traffic collision involving a tractor and car on the N15 at Ballintra, Co. Donegal this morning 8th November 2013. The driver of tractor, a man in his early 50s, was pronounced dead at the scene. The driver of car was not injured.

“Garda Forensic Collision Investigators are carrying out an examination at the scene and diversions are in place in the area. Gardai are appealing for witnesses to contact Ballyshannon Garda Station on 071 9858530.”