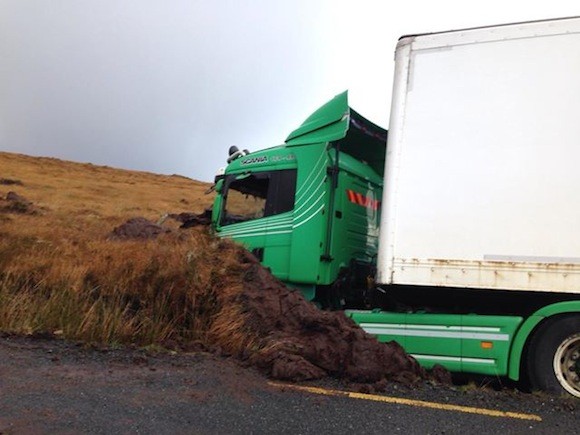 The truck left the road and became embedded on the Errigal Road.

Drivers have been warned to be careful while out and about with hail and some sleet showers.

One driver had a lucky escape on the Errigal Road when his truck left the road and became embedded in a ditch.

The driver was unhurt.

A removal operation is planned to remove the truck from the bog banking.

Mount Errigal had a dusting of snow this morning bringing the reminder that winter could be about to turn nasty.

Gardai are reminding people to take care on the roads with temperatures hovering around freezing at night time.

“We are asking people to take care when out and about.

“We are asking them to ensure that their vehicles are in good working order including their brakes and lights.

“People need to protect themselves while in their vehicles on the roads,” said the spokesman.