DONEGAL STUDENT LAYS DOWN THE LAW! 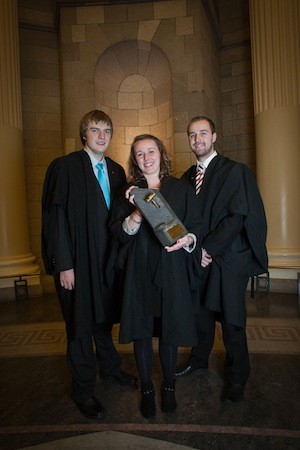 Now in it’s sixteenth year, the event is held in memory of the late Cearbhall Ó Dálaigh, former President and Chief Justice of Ireland.

The competition gives third level law students an opportunity to display their advocacy skills in an authentic courtroom setting before practicing judges of the Supreme and High Courts.

In an appeal against a court judgement, each team of up to four members had to prepare and plead both sides of the case. Oral submissions for the appellant and the respondent were restricted to twenty five minutes, with three minutes allowed for rebuttal by both sides.

Newly qualified barristers, some of whom are former contenders in the competition, adjudicated these rounds, and also gave help and advice to all the participants. Following much deliberation among them, teams from University College, Dublin and University College, Cork, were chosen to progress to the final.

Logical and well constructed presentation, correct use of statutes, cases and precedents, ability to answer Judges’ questions, ability to deal with the other side’s arguments and effective use of time given to rebuttal/response to rebuttal, were some of the criteria that had to be met by the teams.

All the aspiring young barristers were praised by the judges for their skills of persuasion, with the main award going in the end to the UCD team, who fought the case for the appellant.

The team members, Aoibhinn Nic Cionnaith, Simon Mac Giolla Easpaig and Peadar Ó Lamhna, were presented with a cheque for €600, along with the Gael Linn Perpetual Trophy. Both Simon and Peadar were particularly delighted to be awarded the top prize this year as they had been in second place in the 2012 final ! The UCC team, Sadhbh Ní Chéilleachair and Órla Ní Fhiannachta, representing the respondent, received a cheque for €300.

Presenting the prizes, Gael Linn CEO Antoine Ó Coileáin said: ‘Gael Linn is pleased that Bréagchúirt Uí Dhálaigh is proving so popular with law students. As a result of the official status of Irish both at home and in the EU, career opportunities for lawyers with high competence in Irish have never been better. Testament to the status of Irish in the courts is the fact that senior judges are adjudicating at Bréagchúirt Uí Dhálaigh again this year’.