SUPER ROISIN (14) IS STAR OF THE SHOW AS EUNAN’S GIRLS WIN MINOR TITLE! 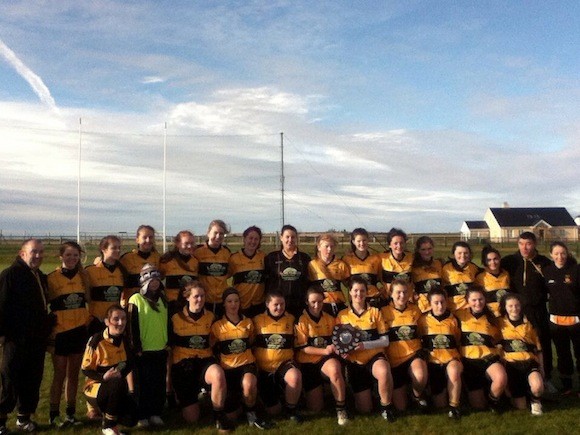 A 14-year-old Gaelic footballer was certainly the star of the show when she led her club minors to a county title.

Roisin McMonagle is a rising talent at county and club level.

And yesterday she was given the Shane O’Donnell treatment by her manager at St Eunan’s GAA club – told an hour before throw-in she’d be playing for the team’s U-18s in the County B Final against Naomh Muire.

O’Donnell famously starred for Clare with three goals in this year’s All-Ireland final replay, after being told he was playing just before throw-in.

St Eunan’s U-18 manager Alan O’Connell decided to do the same thing with Roisin yesterday – and her two stunning goals in the final played in Gaoth Dobhair proved the difference in the end.

The Letterkenny club won the game 3-07 to 1-06, helped in no small measure by ‘keeper Laura Crawford who made a number of outstanding saves.

“It was a brilliant team performance,” said Alan.

“I decided not to tell Roisin she was playing until just before throw-in and she was superb and scored two great goals.

“Laura had an incredible game too, saving us on several occasions with a number of fine stops.”

It’s the clubs second county title on the trot, having won the Minor A Championship last season.