DAMIAN GETS HIS KICKS AFTER BEING CROWNED A WORLD CHAMP!

A young Co Donegal lad has kicked his way to the top of his sport across the world.

Damian, who fights in the welterweight category, is no stranger to success, winning Irish and European titles in recent years.

The 15 year old, who fights out of the PT kickboxing gym in Carrigans is a 5th year student in Deele College and is obviously delighted with his latest success.

Nick-named ‘Kid Dynamite’ for his explosive speed and agility, Damian enthralled the crowd in the Millennium Forum with a brilliant display of technique, speed and strength last Saturday night.

He overcame his Spanish opponent, winning all three rounds in convincing fashion. 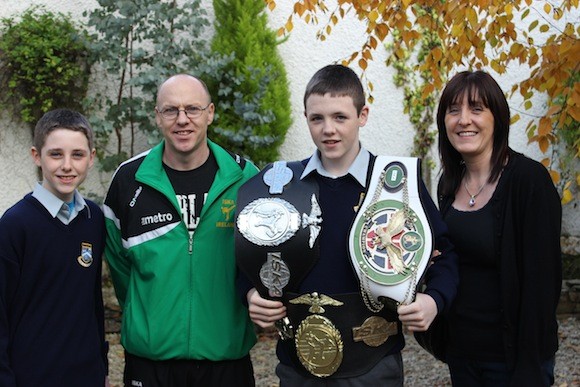 Damien celebrates his historic win with his family. From left, his brother William, father Cathal and mother Arlene

More than 2,000 people were in attendance in the walled city and it was the biggest kickboxing tournament ever seen in Ireland.

His success will have delighted his hard working trainers, Paddy Toland and his father Cathal Duddy who have put so much into Damian’s success. 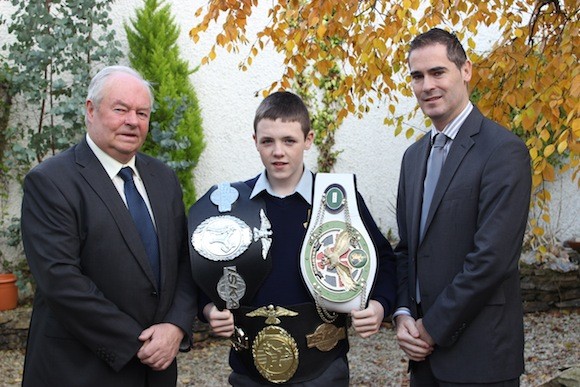 Deele College Principal, PJ McGowan commended Damian on his big win, saying it was great for the school to have representatives like Damian, competing at the top level in his chosen sport.

Damian follows in a long line of sporting heroes who have passed through the door at Deele College, not least four time world champion, Natalie McCarron, who defended her titles successfully on Saturday night.

Mr McGowan also wished 3rd year student Brett McGinty the best of luck in his upcoming European Boxing Tournament in Russia, where he will be looking to emulate his recent success in Eastern Europe and bring back a medal. 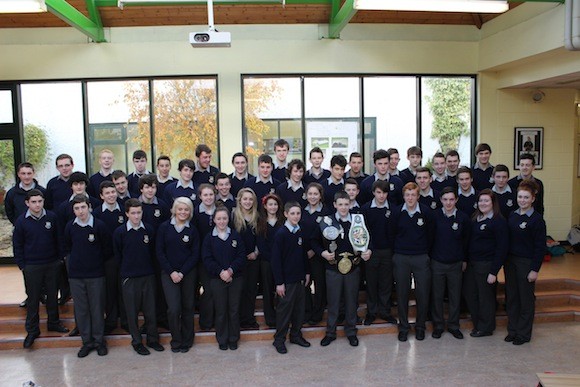 Damien celebrates his World Title with his classmates

DAMIAN GETS HIS KICKS AFTER BEING CROWNED A WORLD CHAMP! was last modified: November 14th, 2013 by Stephen Maguire
FacebookTweetLinkedInPrint
Tags:
Damian Duddydeele collegekick-boxingRaphoe