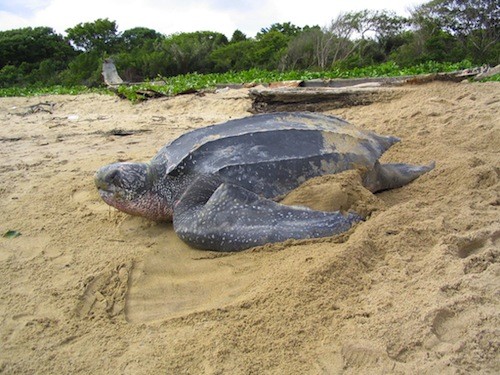 A mysterious creature washed up off the coast of Co Donegal has been identified as a Leatherback Turtle.

The creature was found by walkers at Magheroarty Beach near Gortahork.

This is the second discovery of a dead Leatherback Turtle on Irish beaches in recent days with another being found in Dingle.

Marine biologist Dr Tom Doyle of the Coastal and Marine Research Centre at University College Cork told Donegal Daily it is possible the turtles may have drowned. 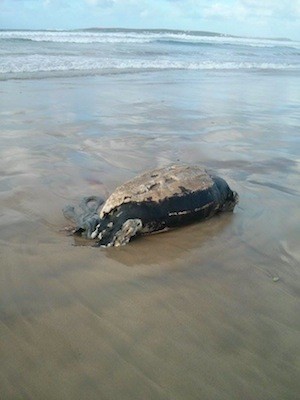 The remains of the turtle washed up at Magheroarty

“They could have become caught up in pot ropes and eventually drowned.

“That often happens but it is difficult to tell,” he said.

Dr Doyle said a number of alternatives are being looked into to attempt to keep turtles away for the paths of such buoy ropes.

The huge Leatherback Turtles, which are native to Irish shores, can live up to 80 years and can dive to a depth of up to 1,280 metres.

The creatures lives on jellyfish and migrate to warmer climates around South America near French Guiana.

“Beach litter including plastics are proving a real problem for our turtles.

“The problem is that turtles mistake plastic for jellyfish and are eating a lot of it which is causing them al sorts of problems,” he said.