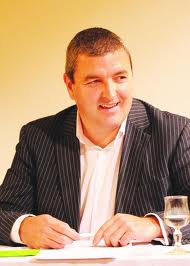 The Board of Finn Harps have confirmed that Joey O’Leary has stepped down from his position as chairman with immediate effect.

The club will appoint an interim chairman ahead of the AGM which will take place early in 2014 following delivery of this year’s annual accounts.

As mentioned in his statement below Joey will assist the club in achieving a first division license for 2014 season.

Everyone at Finn Harps would like to express their gratitude to Joey for his hard work and dedication to the club over the last four years and would like to wish him and his family well in the future.

I wish to confirm that I have notified the Board of Directors of Finn Harps Co Operative Society Limited of my resignation as Chairman which will take place with immediate effect.

I have been honoured to serve the club as Chairman from my election in November 2009 and I now feel that it is time for the club to move in a new direction.

In the past four years, with the help and dedication from the Board of Directors and many volunteers at Finn Harps we have steadied the financial state of the club returning profits in 2010 & 2012, while recording a small loss in 2011. The current season accounts will be delivered at the end of January in line with the club financial year end being the 30th November 2013.

I would like to thank past and present members of the Board of Directors and all the Clubs volunteers who have assisted and helped me and the club in my role over the past four years.

I have been fortunate to have made many friends particularly in the various fundraising events, including Strictly Come Dancing & White Collar Boxing which were held to help maintain senior football in Donegal.

I will assist the new board of directors with the 2014 Club Licensing Application and ensure the club achieves its licence for the 2014 season.

I would like to thank the past management teams and playing staff, who have been excellent to work with over the years and I wish the club every success going forward.