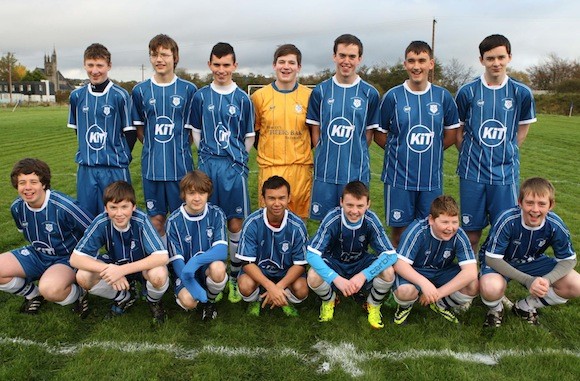 THIS is the U-16 Ballybofey United team – the last from the historic club to play at Finn View today after 85 years.

The club must leave their grounds after being ordered by a judge to make way for a new Aldi supermarket in the Twin Towns.

United – founded in 1928 – played at Finn Park until 1971 before moving home next door to allow Finn Harps to enter senior football.

The ground is owned by the Butt Hall Trust, founded to promote education and community development.

It has sold the ground to Aldi who handed over €1.6M for it.

“We never objected to that,” said Gary Foy from the club.

“We would never object to job creation in the Twin Towns; however we have a sporting lease and we expected to have been offered a new ground. After today’s last United game on these fields, we will be homeless and that is very sad for all the boys and girls who play from U-8 level right up to our men’s team.”

The trust disputes the claim that United teams have played at Finn View since 1971.

A judge has set aside €200,000 from the sale in case United take a new legal case for compensation.

For the teenagers taking on Cappry Rovers today, they aren’t interested in legal disputes.

They just want to play football.

And today will be their last ever game at ‘home’.