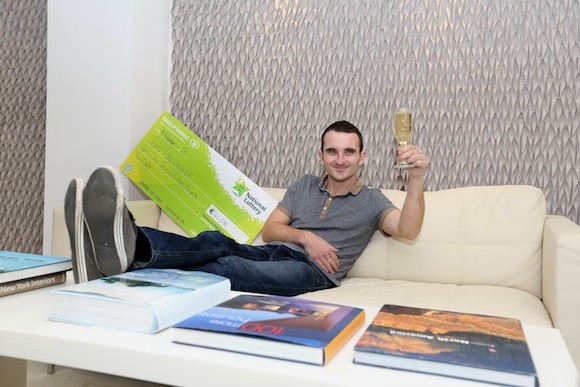 John with his cheque

Young Donegal man, John Gallagher, was on top of the world today when he picked up a cheque for €41,096 at National Lottery HQ.

“I checked my ticket on Friday night. It must’ve been about half two. I couldn’t believe I had five numbers.

“I even woke up my Mam to double check the ticket,” smiled the Carricknamohill native.

John bought his lucky €3 Quick Pick ticket in Hegarty’s Centra on the Main Street in Killybegs, Co. Donegal, only deciding to play after hearing his friends chat about the €100 million Superdraw jackpot.

A player in Spain won that magnificent prize.

John plans to buy a new car with his windfall and looks forward to celebrating his good fortune at Fawlty’s Bar in Killybegs.