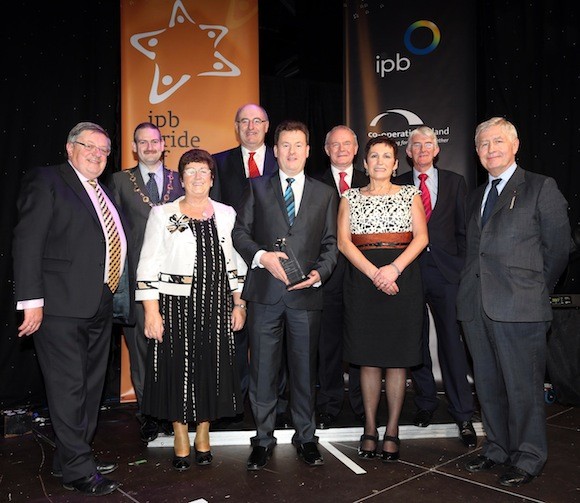 Donegal County Council has been announced as top Local Authority in this years All Island Pride of Place Competition.

The IPB All-Island Pride of Place Competition, which is run by Co-operation Ireland, recognises and celebrates the vital contributions that community partnerships make to society.  The focus is on people coming together to shape, change and enjoy all that is good about their local area.

Speaking following the award ceremony which was held in The Venue in Derry, the County Manager Seamus Neely expressed his delight with this achievement saying: “I am delighted to be in a position to accept this award on behalf of the elected members, staff and management of Donegal County Council.

“The Council has been working closely with communities in Donegal for many years and we believe that the Pride of Place competition is a great way to recognise and showcase the tremendous work that takes place throughout the county.

“It is a great opportunity for us to show our appreciation to the many community volunteers and workers who undertake this work.  To receive this prestigious award is a great honour for all of us.”

The Mayor of Donegal Cllr. Ian McGarvey joined with the Manager in expressing his delight in receiving this award.  The Mayor paid tribute to the great work being undertaken by the staff, management and elected members of Donegal County Council.  He said “as Mayor of Donegal I want to acknowledge the great honour that has been bestowed on us by the adjudicators of the All Island Pride of Place Competition.  The Council recognises the enormous contribution made by communities and volunteers to life in the county.  Community development and participation is a core value of the Council and I am delighted that this value and the work that is done day in day out by Council staff and elected members is being acknowledged in this award”.

The Mayor also congratulated Clogher le Chéile who received the top award in Category 1 which is for population of less than 200 people, Insight Inishowen for receiving a special award and Comharchumann Árainn Mhór for runner-up in the Islands category.