DONEGAL CELEBRITY CHEFS STIR IT UP FOR CHARITY CHRISTMAS COOK-OFF 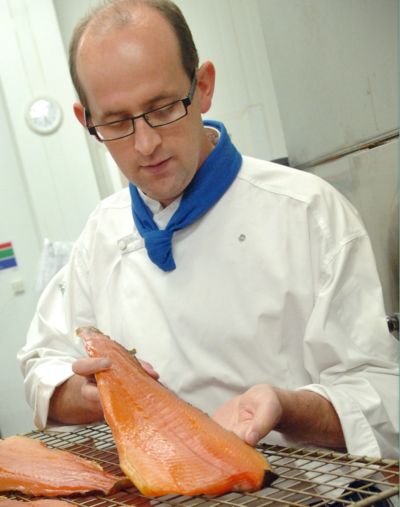 Chef Brian McDermott is all set for the cook-off!

Two of Donegal’s most famous chefs are to come together for a charity night of festive cookery in Letterkenny’s Clanree Hotel on December 2nd all thanks to The Food Coast, Donegal’s Good Food Initiative.

Television chefs Gary O’Hanlon who is Donegal’s Food Ambassador and the No Salt Chef Brian McDermott, will cook up a variety of mouth-watering festive treats with the proceeds from ticket sales all going to the Friends of Letterkenny Hospital and the Good and New charity shop .

According to Eve Anne McCarron, Business Executive with the Food Coast there have been stimulating developments in food activity in the county over the past year with a fantastic response from everyone involved.

She explained that in the last year there has been a number of key actions progressed by Donegal Food Coast who have the role of acting as a central platform for establishing Donegal as a “food county” – a place with a vibrant food culture and food economy.

“There is a definite growth and development in the sector in Donegal now, and it has been driven by a collaborative effort. A night like this charity night will give an opportunity to highlight again the level of co-operation we are able to achieve here to highlight Donegal’s growing reputation for food.

“It is brilliant as well to be able to call on the skills of two of the country’s finest chefs for something like this. Gary and Brian are both hugely well-known across the country following their many television appearances and I’m certain they will cook some sensational dishes on the night using local produce from Donegal.”

The county’s Food Ambassador, Gary O’Hanlon, is head chef at Viewmount Country House in Co. Longford and winner of the ‘Best Chef’ award for Leinster in the Irish Restaurant Awards in 2013.

He says he is delighted that there is such investment now in food in Donegal.

The No Salt Chef, Brian McDermott, who has only this week appeared on the Today show on RTE One with Maura Derrane and Daithí Ó’Sé, said he feels there is something happening and changing now in the county in terms of the food industry.

“There is a real unity now in Donegal, I have to pay tribute to the agencies and to the Good Food Initiative from the Enterprise Board. Everyone has got behind this now collectively – the chefs, the producers and we are now coming together and starting to shout and rightly so because we have some of the best produce this country has to offer.”

The charity Christmas Cookery Night in the Clanree Hotel on Monday 2nd December starts at 8pm starts at 8pm and tickets cost €10. Proceeds from the ticket sales will go to the Food Coast’s nominated charities The Friends of Letterkenny Hospital and The Good and New Shop in aid of Donegal cancer patients and their families, both of which rely on local support.