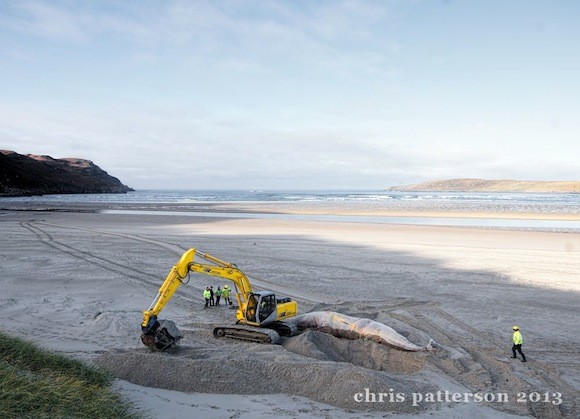 The operation to bury the whale at Maghera Beach.

A massive Sperm Whale washed up of the coast of Co Donegal has ben buried where it was found.

The creature, measuring up to 23 feet long, was found at Maghera Beach in Ardara.

Council officials yesterday inspected the site where the animal was found.

And today officials moved in with machinery to bury the whale on site.

There were fears that the whale would begin to decay and cause a stench and attract vermin.

Instead a large pit was dug for the whale and it was buried to allow to decay naturally.

Local man Chris Patteron, who came across and pictured the creature, paid tribute to the efficiency of the council.

“They were there first thing and it was a bit of a relief to be honest.

“This is a stunning beach and people were a bit concerned that there would be a smell and a pollution issue if the whale was left there.

“It was a great job to see it buried. It’s just so sad because this was a magnificent creature and we’ll probably never know how it died,” he said.

The animal was identified by officers from the National Parks and Wildlife Service as being a young Sperm Whale which usually live in deep waters.

It is not known how it ended up in coastal waters off Donegal.