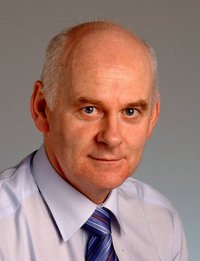 While his family say he is still in a very serious condition, the past 24 hours has seen the Letterkenny politician come off his ventilator.

And it is hoped that in the coming days the 55 year old could be moved from the ICU department to a high dependency unit at Beaumont Hospital.

The father of four has moved his hand and is understood to be trying to communicate with family members.

A close family member told Donegal Daily that doctors are delighted with Jimmy’s improving condition but stressed he still has a long road to travel.

“Compared to just a couple of days ago Jimmy is in a much better place.

“We don’t want to go into the specifics other than to say that doctors are very happy with how things are going.

“Last week it looked like Jimmy was really up against it but he has fought so hard to hang in there.

“We still have such a long way to go but thankfully things are going in the right direction for him,” said the family member.

The Letterkenny businessman was found unconscious on a street in Dublin on Saturday week last after attending an Irish soccer game at the Aviva Stadium.

He had a serious head injury and was put in an induced coma to allow doctors to treat him.

The family spokesman added that Jimmy will remain in hospital until the New Year and hopefully get all the treatment he needs on his road to recovery.

“People have been so good. The amount of good wishes, phonecalls, texts and other messages willing Jimmy to get better is just incredible,” he added.