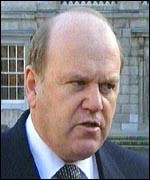 He said builders in Donegal are “night and day working in the black economy” during a debate at the Finance Committee.

Donegal Deputy Pearse Doherty was furious at the comment, accusing Mr Noonan of a cheap shot at the Gaoth Dobhair politician.