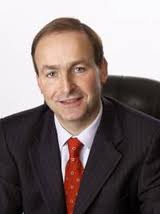 A POLITICAL storm has erupted over claims by Fianna Faíl leader Micheal Martin that Sinn Fein has covered up sex abuse allegations.

Speaking after Gerry Adams’ brother Liam was jailed for 16 years for sex abuse, Mr Martin claimed his party is aware of a number of cases where the Republican movement attempted to deal with cases of sexual abuse internally rather than involve the authorities.

He claimed Sinn Fein had acted in the same way as the Catholic Church.

Liam Adams abused his own daughter Aine in the 1970s and 80s.

Sinn Féin TD Pearse Doherty was furious at the claims.

“The decision by Michael Martin to use this traumatic case to try and score political points is absolutely disgraceful and sickening,” said Deputy Doherty.

“There is no comparison between the approaches by Gerry Adams in this case and that of the Catholic Church in dealing with abuse allegations.

“Gerry Adams did the exact opposite. He acted in good faith to support the victim.

“The accusation was reported to the statutory agencies and the RUC in 1987.

“Gerry Adams co-operated fully with the PSNI, with the PPS and courts, and he gave evidence against his brother.

“Those are the efforts of someone seeking to support a victim.

“Mr Martin goes on to claim that he has been ‘notified’ of other cases of abuse.

“The question needs to be asked of Deputy Martin as to when he received this information and has he passed it on to Gardaí?

“That is the only appropriate course of action for any responsible citizen.

“Or is the reality that Deputy Martin will seek to use any issue no matter how difficult for those directly involved to try and score cheap political points.”