WHY NOT ‘WALK THE LINE’ WITH BRIAN?

On Sunday morning next a walk with a difference will make its way from east to west across Donegal following as near as possible the route of the old L.L.S.R journey from Derry to Burtonport. 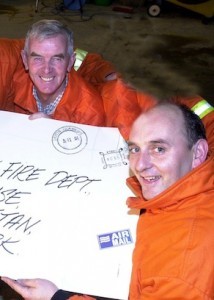 Brian (right) with his good friend, the late Eamonn Harvey on another fund-raising venture a few years back.

The walk is the long-term dream of a Photographic Journalist, Brian McDaid who has life long interest in transport of all kinds.

In 2006 Brian used his interest in motoring to raise funds and the profile of the Hospice in Donegal with a trip to Monte Carlo in a Mini Cooper, which was done in memory of his friend and fellow firefighter who passed away in the Hospice in January 2004

Ten years on from the death of Brian’s friend Eamonn Harvey, he wants to remember his late friend’s anniversary with a non money raising event, “Walk the Line” which is borrowed from a Johnny Cash song title and is an a tempt to walk from Derry to Burtonport keeping as near as possible to the old railway track as it makes its way through Donegal

The walk is not an to break a time record (if there ever was one) but it more to highlight awareness for the middle aged (like our Brian) to look after their health, High Cholesterol, Blood Pressure, Diabetic and your mental state of health all can addressed by walking a little, regularly.

Over the duration of the journey it is hoped that needs for regular exercise and regular check ups could help prevent more serious medal problems like heart attacks and strokes in the future.

The journey will have breaks between stations along the old railway route starting at the Old Pennyburn Station site in Derry which will be launch by the Mayor of Derry Cllr. Martin Reilly and will make it way to Burnfoot and on to Tooban before heading in the direction of Letterkenny via Newtowncunnigham, Sallybrook , Manorcunnigham and Pluck Stations.

The walk will head out of Letterkenny on to old Burtonport Line through Churchill, Kilmacrannan Cresslough, Dunfanaghy, Falcarragh, Gweedore, Crolly Dungloe before arriving at the end of the line.

The total distance on the old railway from Derry to Burtonport is 74 miles. If you see Brian and co en-route, give him a beep or a wave in recognition of his great gesture.

WHY NOT ‘WALK THE LINE’ WITH BRIAN? was last modified: November 28th, 2013 by Stephen Maguire
FacebookTweetLinkedInPrint
Tags:
Brian McDaidburtonportDerrymen's healthWALK