TORY HELICOPTER SERVICE TO GET A SOFT LANDING

Tory Island is really taking off – or landing as the case may be. 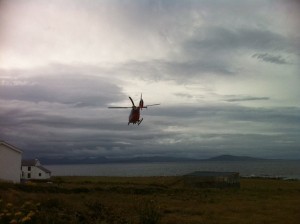 The helicopter arrives on Tory.

The island has just been granted permission to build a helipad so choppers can land they safely both day and night.

At present the chopper, which brings the doctor and other people to the island, has to land in an unmarked field or at the back of the health centre.

The helipad is expected to go to tender early next year and work will start on it soonafter.