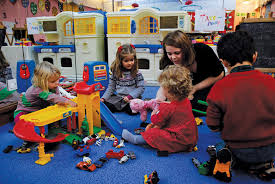 It now costs Donegal families €16,500 a year for full-time childcare for a family of two children, a new study has shown.

A creche – pic posed by models.

The shocking figures are contained in an extensive report commissioned by the Donegal County Childcare Committee.

The report, entitled “Supporting Working Families – Releasing a Brake on Economic Growth”, examines potential policy options to address the childcare obstacles that exist as a barrier to employment.

With 266,000 households with children under five years of age, the report confirmed that these costs are a barrier to the workforce.

One statistic shows that 26% of parents with children at nine months of age indicating that they were prevented from returning to work or training as a result of expensive childcare.

These barriers to employment are particularly severe among lower income groups, with 56% from this group indicating that childcare prevented them from looking for a job.

Manager of Donegal County Childcare Committee, Avril McMonagle said the report throws light on a growing problem and illustrates the extent to which childcare costs are putting a brake on Ireland’s economic growth, restricting a significant number of parents from returning to work after having children.

“With few solutions to this problem proposed until now, this report outlines two policy options for combating this barrier to the workforce, with a particular focus on incentivising the hard hit lower income working families.

“Primary research shows that there would be strong interest in such schemes and by facilitating unemployed parents to return to work or remain in employment, these initiatives would see an economic benefit to the taxpayer in the long run.”

Minister for Children, Frances Fitzgerald said she welcomed the economic assessment contained in this report.

“This data further contributes to our understanding of the pressures on Irish families but also the very significant economic and societal importance of the early years and childcare sector in Ireland.

“I have no doubt that this report will help spark debate and inform policy makers as we consider further development in this important area.”

The full report can be downloaded from www.donegalchildcare.com.