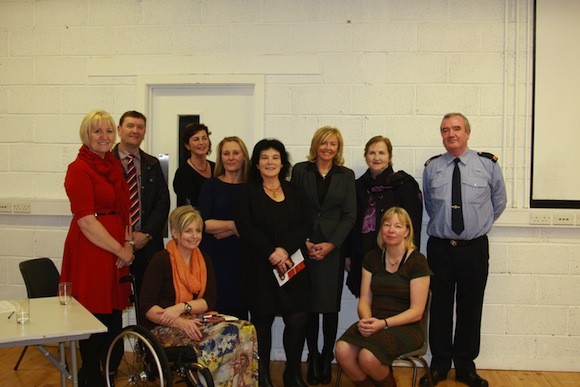 An information booklet aimed at raising awareness among local HSE and voluntary service providers that human trafficking is a crime which can take place anywhere, including rural areas such as Donegal, was launched in Letterkenny on Monday.

It provides a readable, concise overview of the issue of human trafficking, along with contact information of both local and national, statutory and community organisations.

Statutory and voluntary services can be the first point of contact for potential victims of trafficking. It is important that service providers are alert to this issue and are able to recognise, respond and report or refer any concerns appropriately.

Kieran Doherty, General Manager, HSE Donegal who launched the booklet said, “The information booklet is excellent. It should be used as a template for the rest of the country as it would be a valuable resource for frontline staff”.

Speakers at the launch included Gerardine Rowley, Policy & Communications Manager from Ruhama, representatives from An Garda Siochána and Aibhlin O’Leary from the immigrant Council of Ireland. Information stands represented several local and national organisations, and a sample of artwork from the booklet by Saif Modawi was also on display. The sponsors for the publication of the booklet were Letterkenny Women’s Centre.

In addition to producing this information booklet, the working group have previously organised presentations for both the clinical society in Letterkenny and local General Practitioners in the Donegal Town area. The group plan further events in Co Donegal, to continue to raise awareness of the issue of human trafficking.

The booklet is available on the HSE website at the following link: